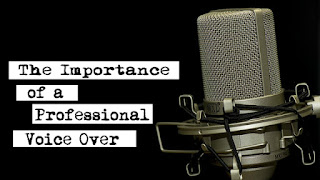 The Importance of a Professional Voice Over

By Grant Lingel
In Marketing
At some point in the last ten years, you’ve probably heard one of “The Most Interesting Man in the World” commercials from beer brand Dos Equis. As you read through the lines you can hear the voice in your head: “His reputation is expanding faster than the universe. He once had an awkward moment just to see how it feels. He lives vicariously through himself.  He is the most interesting man in the world.” The lines are humorous but delivered in a serious tone with just the right pauses giving the commercials a sly yet authentic documentary quality to them. The commercials are memorable. They set a mood and bring the viewer into that world. These qualities are the mark of great voice over work.
Odds are you’ve never heard of Will Lyman. He isn’t a household name. You wouldn’t recognize him if you passed him on the street. If he was in line in front of you at the coffee shop, his voice might sound familiar. You’d rack your brain wondering how you knew him. “I know I’ve heard this guy before,” you’d say to yourself. And you’d be right. This goes to show the importance of a professional voice over.
Lyman has been doing the voice over narration for PBS’s award-winning Frontline television series since 1984. His voice is synonymous with the program and its serious, in-depth journalism. When someone wants to parody a news expose program, they often go for a Will Lyman sound alike. If you want to give your commercial an air of professionalism and credibility, hire Lyman.
And that’s exactly what the marketing firm that produced the series of “The Most Interesting Man in the World” commercials did for Dos Equis. Lyman’s tone was a perfect match. While video is primarily a visual medium, there is more riding on the success of a video than just the footage and graphics. You don’t always notice when voice over is done well because it seems so natural and part of the final product that you can’t imagine it any other way. It’s when the voice over is poor that it becomes noticeable.
Think of someone whose voice you can’t stand. Now read the lines from that Dos Equis commercial in their voice. Does it still convey the same meaning? A weak voice or a mismatched voice can take a video from professional to amateur quickly.
Even if you’re working on a smaller scale or a smaller budget, the voice over is still a critical component of the work. A good voice can make up for a lack of production quality. Here are eight aspects of voice work that can impact your production. Take these into consideration when searching for voice talent.

The right voice can be reassuring. It can let people know that you’re honest. The voice you choose will be representing your company or your product. People want to know you are on the level and the way the words are delivered go a long way in reassuring them.
Ford, and later Wal-Mart, didn’t just hire Mike Rowe for their commercials because of his distinct, opera-trained pipes. He represents honesty and hard work, and his voice carries that same essence. Even if you aren’t familiar with his TV shows, those qualities are present in his commercial voice over work. He doesn’t sound like a slick salesman. He sounds like your neighbor.

How should people feel when watching your video? Confident? Concerned? Hopeful? Excited?  Voice artists can imbue the script with emotion. Professionals know where to pause and where to change the inflection of their voice. The viewer makes an emotional connection and becomes invested. What tone do you want to set? What is the mood of the piece? The answers to those questions should play a role in who you hire to do voice over work.

Relate to Your Audience

If you are making a video directed at senior citizens, would you want a young person doing the talking? If your video is about women’s health, would a male voice over be the right choice? Knowing your audience is crucial. Age, gender, and ethnicity are all factors to take into account when choosing voice over talent. Just because something sounds good to you doesn’t necessarily mean it will sound the same to someone else.

Let’s revisit Will Lyman and Frontline. It doesn’t matter which episode you watch, Lyman’s serious, authoritative tone makes you feel as if that particular subject is the most important problem facing the world today. On top of that, everything he says is so convincing. He could rattle off a list of made up “facts” and you would still sit there nodding in agreement because he sounds credible. It’s not the music, the footage, or the editing that makes it feel that way. It’s the voice over. Who is saying it and how they are saying it matters.

Great voice overs can be so catchy that they become a part of the brand, and in some cases popular culture. “Beef: It’s what’s for dinner.”  Did you hear Sam Elliot’s cowboy drawl when reading that line? His voice doesn’t just make you want to have a steak; it makes you want to ride a horse across Montana.
John Facenda, best known for his work narrating NFL Films in the 1970’s, never actually uttered the phrase, “the frozen tundra of Lambeau Field.” Sportscaster Chris Berman was impersonating Facenda when he first delivered that line. Facenda’s voice was such an integral component of NFL Films that the reference seemed genuine. That’s the power of great voice work. If people are still mimicking your style forty years later, you did it right.
When you’re looking for voice talent, you want someone you can use long term. You can’t develop a voice for your company if you change voice artists for each item you produce. Take the time to find the right talent and then stick with them.

Leave Them in Stitches

Have you been at a conference and heard a presenter tell a lame, forced joke? That cringe-inducing delivery followed by awkward chuckles and slow sympathy claps? Often the difference between a joke hitting or missing comes down to timing. Comedic timing is a skill. If your piece includes humor don’t leave it to an amateur. With the right voice artist, you can hear them wink.

The Power of Persuasion

Voice has the ability to persuade.  Have you ever been sold something by a salesperson who was so good at their job you didn’t even realize what had happened until you were driving home with your new purchase? Were they dull and dry? Did they speak in a monotone? More than likely they were engaging and spoke very deliberately. If you have a call to action or a sales pitch in your video, having a convincing voice over artist will help drive that point home. You want your audience to take action, not lose interest or fall asleep.

People judge on appearances. Whether you like it or not people will judge your company or product based on the quality of the video and voice over. You wouldn’t show up for a job interview in jeans and a t-shirt just like you wouldn’t use paper plates to serve food in a Michelin starred restaurant. Don’t ruin your project with lackluster voice over work. Your video could be a potential customer’s first impression of your brand. They will draw conclusions based on what they see and hear.

Think about the tone you want to set, how you want your company represented, and with whom you are trying to communicate. Spend some time researching voice talent. Listen to voice samples and make sure you are getting someone who matches your criteria. The right voice over will elevate your video and make you look like a pro.